Interdressage?- Who runs that then??? By Karina Hawkridge 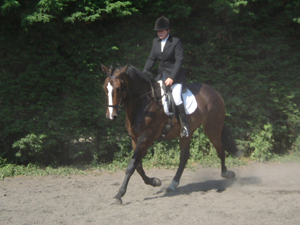 I thought it might be time to give some of our newer Interdressage enthusiasts a little bit of ‘background’ about the person that they deal with on a monthly basis- so here goes- feel free to doze off or skip bits! (Thats me on the left riding Shearer- the inspiration for Interdressage!)

I have been riding since the age of 7 (1973 was when I had my first ‘official’ riding lesson but I had been riding donkeys on Scarborough sands since the minute I could walk- Grandad would give the person in charge a fiver and that would last most of the day- it left my parents free to do what they wanted – neither were ‘horsey’ and I was happy riding up and down the sands- some days I had to be lifted off as I had actually fallen asleep-the date gives you an idea of how old I am!!!)

I have never had a 'school master' -my dad bought me a newly backed 3 year old pony because he was a fiery chestnut and could gallop like the wind –unfortunately that was just in straight lines so cantering a 20m circle in the ménage took quite a bit or ‘mastering.’ As you probably can guess my dad was not a horseman! - I was just 8 years old- I had that pony till the day he died in my arms at the grand old age of nearly 30 - he taught me a lot about the way ponies think!!!

After him I had a jumping pony that no one else liked riding because he would gallop backwards before the bell then gallop forwards after it jumping anything that got in his way- he took me up until the age of 18 when I was bought (again by my dad-God rest his soul) a 16.2hh 3 year old- un broken Irish Draft X T.B that I had to break and produce by myself. I went on to compete in dressage and show jumping classes with him.

In 1987 and at the grand old age of 21, I married Stevie and we set up our own yard- with absolutely no money- (we managed to persuade parents and the bank to back us!!) When I say ‘own yard’ it was 6 acres of derelict land scattered with old greenhouses, falling down outbuildings and not a blade of grass in site- Stevie turned the old potting shed into a couple of rooms where we ate and slept and we have been adding to it ever since!! He also had to build ALL the stables, erect fencing and create paddocks in one of the coldest winters on record- no wonder his joints a creaking now!  To earn a living and to pay back all concerned we started 'dealing' in horses but the only horses we could afford were the ones that no one could do anything with! I had then about a 3 month turn around to get them working and riding well enough to find new homes- Recently I was counting up the amount of horses I have ridden, produced and sold in the last 22 years and it is nearly 2000 -so all my experiences with horses have revolved around finding out the best way to get the desired result and I have discovered along the way that there are very few shortcuts or ‘quick fix’ methods  that work and that kindness and compassion and building up trust and confidence is the only way!!

I was lucky to have been taught by an 'old school' instructor who would have been classed today as a 'horse whisperer' she was amazing- sadly no longer with us but she gave me a good grounding and taught me from a very early age to keep your eyes open and your mouth shut -listen to everything everyone has to say without prejudice then take away the advice and use what works for you! 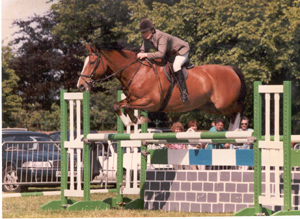 As we were building up our business I competed in show jumping classes bringing on novice horses up to jumping 1.30 tracks-(Me on the right competing on 'Look Up') I also groomed and schooled horses for a top international young rider for four years and travelled Europe with him- this is when I was exposed very much to the darker side of equestrianism! I was pleased to get out of this - the tricks these guys got up to to get results leave me cold. I saw grooms blistering the shins of top horses legs and covering them with boots to  make them jump more carefully, I saw horses been ‘rapped’ with poles to make them jump higher, I saw ‘top names’ working horses for 3 hours before classes with their noses on their chests and strapped down with draw reins and a tonne of iron work in their mouths- I have seen ‘top names’ swinging on crank nosebands to ‘give a horse breaks’ and once I overheard a top rider tell his groom to go in the lorry and beat up the chestnut to 'sharpen her up' before jumping a novice class!!!!! These tales are just the tip of the iceberg!!! I could go on for ages. It is no better at top level showing! I have seen professionals feed their ponies so much that they get laminitis and then lunge them in the mid day sun for 2 hours wrapped in plastic to 'tone them up' I have listened to them boast about how they have had to trim horses feet so severely that they have almost bled and how they have kept them without water for 2 days to dehydrate them so that they 'measure in'- Unfortunately the elegant sport of Dressage fares no better- You see riders working horses with so much care and attention paid to bandaging and protecting their valuable horse’s legs but think nothing of working in ‘hyper flexion’ for 2 hours where all they can see is the floor in front of their feet!! I'll stop now- I could bore you for ‘ever and a day. But at least these guys have made me realise that success in the show ring is NOT how you measure success as a horseman!! I wouldn't care if I never set foot in a show ring alongside these people again- what I hope to be able to do now is help other riders achieve good results with ethical and compassionate methods. 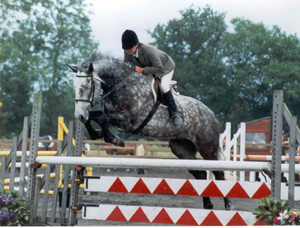 For the last 22 years, as well as competing in show jumping, dressage and team chasing competitions, I have also whiled away my time instructing- anyone and everyone – from nervous adults to 4 year old children on the lead rein at their first pony club rally to very able dressage and show jumping riders.  A lot of my teaching has been in my capacity as an ‘accredited pony club instructor’ with the York and Ainsty South Pony Club- I was a member myself from the age of 8 to 18 and it is a really weird feeling when one of my pupils tells me that they have won a cup and it is really really old because it has my name on it from when I won it when I was in pony club! I teach at their camps as well as rallies all the way through the year.

Since launching Interdressage in 2007 I have got to know some wonderful people and have been lucky enough to teach at new and exciting places! Interdressage has brought me into contact with a lot of ‘like minded’ people and has infused me with new enthusiasm for the sport. It is wonderful to talk to people who are as concerned about ethical training methods as I have become and it is a humbling experience that something so simple as competing via video has opened up literally a whole new world of friends. I would like to take this opportunity to thank everyone who emails me and everyone who has offered help and support and words of encouragement. Long may it continue! 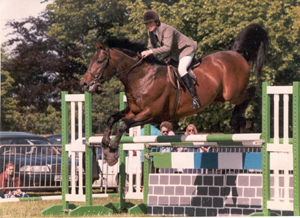